Looking for a fun chicken breed to add to your flock?  The Welsummer chicken is a great addition to any flock with their friendly demeanor and speckled eggs.

Welsummer chickens are a chocolate colored egg layer much like Marans and Barnvelders.  So, they are a great choice for an addition to your flock if you like a variety of egg colors in your egg basket.

But, of course, there is more to this breed than just the color of their eggs.  Let’s jump in and learn all about them so you can decide if this is the breed for you!

Everything About The Welsummer Chicken

This is a Dutch breed which originated in the Netherlands.  They are aptly named after the village of Welsum which is the area that they were first developed in.  The first records of this breed come from the early 1900’s.

This bred was originally developed by mixing several different breeds that were already established and popular in the area.  There is not a definitive record of exactly what mix of breeds were used when establishing the Welsummer as a new breed.  However, it is widely accepted and thought that the following breeds had an influence in their origins:  Barnvelders, Cochins, Rhode Island Reds and Leghorns.

Due to their favorable personalities (more on that below) and their beautiful eggs (more on that below, too!), this new breed started becoming more and more popular.  By the early-mid 1900’s, breeders started to import them from the Netherlands to other European countries and eventually they made their way to the US and other countries as well.

As the breed gained popularity, breeders also began to work toward a standard appearance.  The APA breed standard was implemented in 1991.  They are in the Continental class.

Speaking of the breed standard, let’s jump right into their appearance.

The Welsummer chicken, as mentioned above, has a breed standard documented by the APA.  If you are going to be breeding or showing your chickens, then they must adhere strictly to the breed standards with no disqualifications.  If you are just keeping them for pets, eggs or meat then meeting the exact standards is not as important, but they should meet some general points to ensure they are purebred.

The males and females, as in any breeds, tend to look quite different.  Are you familiar with the Kellogg’s rooster?  He was a depiction of a Welsummer rooster.

This breed comes predominantly in one color which is red partridge.  They likely inherited this from the Cochins and Leghorns in their lineage.

Partridge is a pattern.  Which can actually be found in several breeds including Silkies.  The partridge pattern looks sort of like muddle stripes.

The red of the red partridge refers to the general base color of the pattern.  Welsummers end up looking like a mix of brown, gold, red and black.  Most of their brighter colors pepper their neck, shoulders and chest.  And their color gets darker as it goes down their back towards their tail.

In addition to the red partridge color, they also come in Gold and Silver Duckwing.  However, these are less common and not as accepted.

They should have yellow colored legs and red colored eyes, comb, wattles and ear lobes. Additionally they are a clean legged breed, this means they do not have feathers down their legs or feet.

Welsummers come in both large and bantam sizes.  Large fowl is simply a designation for your standard sized chicken breeds.  Bantam chickens are essentially a mini version of the large fowl breed (usually in the 3 or so pound range).

We are going to focus here on the large fowl variation of this breed.  They are considered a medium sized large fowl and typically weigh in the 6 – 7 pound range.

There are actually several different comb types possible depending on the breed.  Some of these include, single comb, double comb, pea comb and walnut comb.  The Welsummer is a single combed breed. This means that their comb is one single strip with several points on the top.

As mentioned above, their combs and wattles should be bright red to meet the breed standard.

A few other points about their appearance.  They are not a crested breed like Polish are.  Also, they should have 4 toes to meet breed standards.

It is important to know what a breed is like before adding them to your flock.  Let’s discuss temperament, personality and other important characteristics of the Welsummer now so that you can make the right decision for your flock.

Welsummers tend to be friendly birds.  The girls we have in our flock are pretty tame and don’t mind at all being picked up and handled.  This breed also tends to be very intelligent and calm.

Some breeds can be pretty spazzy, but not these birds.  Most of the time, our girls are just calmly out free ranging.  They don’t tend to run when you walk up to them.  They are really pretty chill.

Although Welsummers can do well in confinement, they are also really great foragers.  The Welsummers that we have in our flock have always been satisfied with utilizing whatever amount of room we have given them.  Meaning, they seem content at times that they are kept in a smaller run.  However, when they are in a free ranging situation, they will spend all day out exploring and free ranging and foraging for food.

So, while this breed can definitely do just fine with confinement, if you have the set-up to allow more foraging they will enjoy that a lot.  And as an extra bonus, this can really help to cut down on your feed cost.

Welsummers are well known mostly due to their eggs.  They are great layers of beautiful, large eggs.  For more egg specifics such as color and frequency, keep reading.

This breed lays a really beautiful and uniquely colored egg.  It is a dark brown or chocolate egg that often times will have speckles or spots covering it.

As with other dark brown/chocolate egg laying breeds, the dark color is laid on the egg at the time of laying.  It can actually be wiped partially off if you gather the eggs directly after they are laid.

They tend to lay around 4 times a week.  Per year, they usually average somewhere in the 160-200 egg range.  Things like weather, health, molting, age and the individual bird can affect the exact amount of eggs that you will get.

In any case, they are really quite good and steady layers.  Of note, while they can be broody at times, it is not common in this breed which is great if you are just looking for a good layer.

When it comes to egg laying, some breeds are better than others and some breeds do better in certain conditions than others do.  Due to this, there are designations such as cold and heat hardy that can help identify if a particular breed lays well in cold or hot weather.

Welsummers are a breed that combines both of these and they are actually cold and heat hardy. What does this mean?  This means that they can lay well in both the winter and the summer.

What Is Their Purpose?

Whenever you are considering a new breed to add to your flock, it is important to think about what their purpose will be.  If you choose a heavy breed that doesn’t lay well when you want eggs, that won’t be a good fit.

Here are some of the main purposes that Welsummers are well-suited for.

Due to their calm and friendly temperaments they make great pets.  So, if you are looking for a bird to add to your flock that won’t run when you walk up to them and won’t mind being picked up and handled, this breed would make a good fit for your needs.

As already discussed, their egg laying ability (both amount and color) are one of the characteristics that has caused this breed to become more and more popular.  So, if you are looking for fun colored eggs or simply a good egg layer then this breed is for you!

Even though Welsummers are not a heavy large fowl, they are still considered a dual-purpose breed.  This means that they are suited for raising for both eggs and meat purposes.

If the only thing you are looking for is a meat breed, then they may not be the best choice as there are other breeds that better serve that purpose.  However, if you want a breed where you can cull extra roosters and still have good egg laying hens, then this breed would be a good option for your purposes.

Here are some answers to common questions about this unique breed.

Welsummers lay dark reddish brown eggs.  It is not uncommon for their eggs to also have various degrees of darker brown speckles or spots covering them.

Yes, they are cold hardy.  This makes them a fantastic choice for your flock if you live in colder climates as some breeds will quit laying completely during cold weather.

At what age do Welsummer hens start laying?

They typically will start laying in the 5 – 6 month age range.

Yes, they are rare.  Although they are starting to become more and more common due to their friendly temperament and good egg laying.  They are certainly not the rarest breed, but they are not one you will see every where…..yet.

Yes, they can be noisy.  Of course, this can be a little dependent on the particular chicken.  But, in general Welsummers like to squawk (especially during egg laying) and can get quite loud.

In summary, Welsummers are a well rounded choice for your flock.  They can be a multi-purpose bird.  They are easy to handle as well.

Ultimately, adding this breed to your flock will depend on what your goals and needs are.  But, they certainly make a good addition for a lot of situations.

Have any questions or have your own Welsummers?  Let us know in the comments below!

For more on chickens

When do Chickens Start Laying Eggs? – 3 Signs Your Hen May Be Ready to Lay 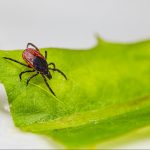 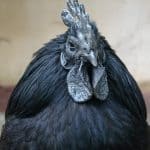 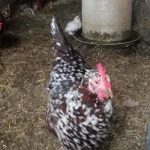 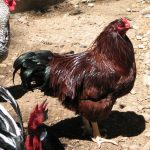