This site contains affiliate links. We may earn a commission if you purchase from one of these links. Learn more Here. 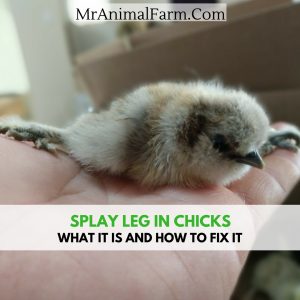 One of the common (and usually fixable) issues that a chick might face is spraddle leg which is also called splay leg.  Here is how to identify and help fix splay or spraddle leg.

What is Splayed or spraddle Leg?

Splayed leg (also known as spraddle leg) is a condition that some chicks will develop.  A chick that has splay leg (sometimes in one and sometimes in both legs) will look like it is doing a split or straddle.

The chick often times will have difficulty or be completely able to get their legs under them.  Depending on how severe the condition is, they may be unable to walk. 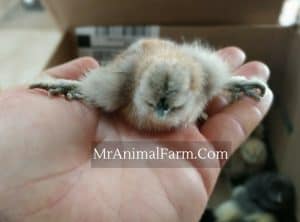 What can cause Splay or spraddle Leg?

Causes of splay leg can be several things including incubation issues (temperature, humidity or getting stuck in the shell in an awkward position).  Another cause is when chicks try to walk on too slick of a surface such as newspaper.

They will need a solid, textured bottom on their brooder.

How can you fix or correct Splay or spraddle Leg?

The fix is relatively simple, all you need is a band-aid, a pair of scissors, and a chick with splayed leg.

(You can also use vet wrap instead of a band-aid.)

1. You can use any type of band-aid you like. I prefer to use a cloth band-aid instead of a plastic band-aid. The cloth is more pliable and comes off more naturally when the chick is ready.

Take the band-aid and cut it in half lengthwise. 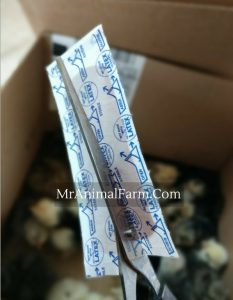 2. Wrap one end of the band-aid around the chicks leg at the knee joint. With Silkies, you have to make sure you do not wrap their fifth toe or leg feathering under the band-aid. 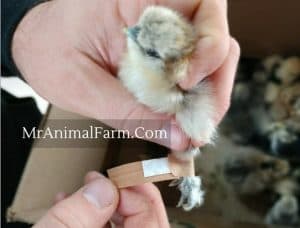 3. Repeat the process on the other leg and wrap the other end of the band-aid around the chicks other leg again at the knee joint. 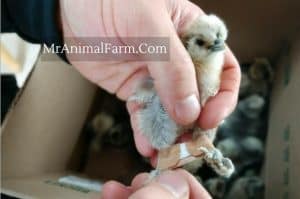 4. The band-aid should keep the chicks legs under its body allowing it to walk and also helping the legs to re-position themselves correctly. 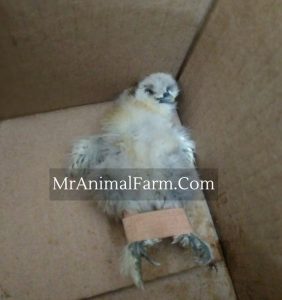 The chick will likely have trouble getting used to the brace. It will probably seem a little dramatic at first but it will learn to adjust.

5. Often times the chick will be unsteady while walking.  Make sure it is able to get to food and water.  We add marbles to the water in case it falls in to ensure it won’t get stuck and drown.

6. Leave the band-aid on until the chick is walking strongly enough that it pulls it off.

Rarely, a case of splayed leg is severe enough that this treatment will not work. If the initial treatment doesn’t work, just repeat the process again and it should work just fine.

Video Tutorial for how to correct splay leg

For more on chickens: